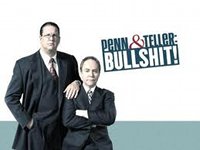 Time for a break in a long blogging hiatus. A close friend of mine informed me that Penn and Teller recently did a Bullshit! episode on self-esteem, which can be viewed here (though it might become defunct due to being in violation of so-called "intellectual property" laws). A very thorough explanation of the show was done on an Objectivist forum post.

Naturally, Nathaniel Branden was one of the self-esteem proponents they featured in the episode, alongside a line-up of others whose views on self-esteem were either underdeveloped or seriously misguided (easy targets for Bullshit!'s team). Even though Branden and his work could have been the logical counterpoint to these others—after all, he's the go-to expert for a comprehensible understanding of self-esteem—they instead discredited him and his views. Toward the end of the show, they declared that he "was wrong" on the value of self-esteem in society, which they based on an out-of-context quote (more on that in a bit) taken from the California Task Force study. The study's full title was Toward a State of Esteem. The Final Report of the California Task Force to Promote Self-esteem and Personal and Social Responsibility. Among other things, the Task Force was charged with integrating self-esteem principles into such disintegrated organizations as statist schools and government itself.

A choice quote from the Task Force's conclusion was: "Governments must recognize the inherent worth in being human." However, since governments are logically defined as groups of humans who coerce other humans in a monopolistic fashion to obey rights-violating laws and harm them if they disobey, one wonders about their meaning of "worth" here. Many advocates of human freedom and property rights have noted the destructiveness of using coercion to achieve anything purportedly good. If individuals don't consent, then clearly it's not voluntary. Viewing human beings as sacrificial fodder for the alleged common good or public welfare is inherently anti-self-esteem.

Yet, contrary to Bullshit!'s contention, the Task Force (regardless of its problems) did conclude that issues of self-esteem are indeed tied to a host of problems in society. I downloaded the study linked above and converted it from pdf to text, so that I could find the quote Bullshit! used to disparage self-esteem (while overlooking Branden's views on self-esteem): "The associations between self-esteem and its expected consequences are mixed, insignificant, or absent." Well, as it turns out, that was a quote within a quote by the individual views (not the Task Force) of David Shunnuhaff-Khalsa, who was quoting professor Neil Smelser, who was part of the academic research team that offered their views to the Task Force. Here's the quote, in context:

My views and experience are so substantially different from the group consensus that I am compelled to address four areas of major discrepancy.
1. The Task Force's interpretation of the UC professors' academic findings understates the absence of a significant linkage of self-esteem and the six social problems [which were: (1) family (parenting, child abuse, teenage pregnancy); (2) education (schools and academic failure); (3) substance use and abuse; (4) crime and violence; (5) poverty and chronic welfare dependency; and (6) the workplace]. Quoting Professor Smelser's overview (p. 15), "The news most consistently reported is that the associations between self-esteem and its expected consequences are mixed, insignificant, or absent." (p.142)

As you can clearly see, the Bullshit! team picked a particular view that is at odds with the general findings of the Task Force. To get a better understanding of the Task Force's findings, here is a quote from their "Recommendations and Discussion" section that takes Smelser's assessment into account:

Formal inquiry has nonetheless contributed significant insights. The research papers that several professors prepared for us were published by the University of Califomia Press under the title The Social Importance of Self-Esteem. Neil Smelser, who edited the book, contends that the variable of self-esteem remains elusive because it is difficult to pinpoint scientifically. According to Dr. Smelser, this does not mean that the study of self-esteem be abandoned, but that the current scientific procedures be altered. (For a thorough discussion of thc new research characteristics that Dr. Smelser recommends, refer to his introduction in The Social Importance of Self-Esteem.)

In the scientific literature, no consistently accepted definition exists for self-esteem, which makes it difficult to compare various studies. As a result, our researchers felt unable to establish causal relationships. Most existing studies speak of significant correlations, which is customary within social science research. To paraphrase Martin Covington in his research review for the Task Force on academic success, just because the causality chain is incomplete with regard to self-esteem, it does not mean that it is implausible. In fact, the case for self-esteem is not only plausible, it is compelling. Current research findings essentially support the notion that improving self-esteem and self-esteeming social conditions can have a positive impact on many of our most pressing social problems. (pp.43-44)

And if the Bullshit! team had gotten to the truth in this matter, they would have used the following summarizing quote by the Task Force:

We of the Task Force are excited with the results of these three years of study, discussion, and decision. We believe that we have substantiated the premise on which this project was built—namely, that self esteem is central to the personal and social concerns we face today. We are even more convinced that healthy self-esteem is central to positive possibilities for us as individuals, as communities, and as our state. We are grateful that so many Californians have chosen to share this dream with us. (p.44)

So, even by the standards of the California Task Force (many of which are admittedly illogical and even unjust, such as using extorted money and a legislative process), Branden was not incorrect, contrary to what the Bullshit! team stated (namely Penn the narrater, since Teller refrains from speaking as part of his shtick). In fact, none of the individuals who created this show offered to the audience a coherent and sensible definition of self-esteem, such as: having confidence in one's ability to think and accurately judge the facts of reality, to cope constructively with life's challenges, and the feeling that one is worthy of happiness. Unfortunately, this episode was filled with ad hominem attacks and lacked some objectivity in narration. By the way, here's a five-minute audio clip by Branden in which he addresses critics of the idea that self-esteem deficiency is the common denominator in human psychological and thus behavioral dysfunction.

Given my immense appreciation of Branden's work (all his books and workbooks and audio content on self-esteem principles and dynamics), it's heartbreaking to see him entering the twilight of his life; from the Bullshit! video it's evident that his mind and body are not nearly in the condition they used to be (a few surgeries and 80 years have taken their toll). Needless to say, he was not able to effectively overcome the Bullshit! team's editing tactics. It also appears that neither Penn nor Teller and the crew took the time to read any of Branden's books. Even though they ended the show with a point about taking persistent, goal-directed action to improve one's self-esteem, the fact that this entails practicing and living the six pillars of self-esteem escaped them. Living consciously, practicing self-acceptance, self-assertiveness, and self-responsibility, as well as living purposefully and with personal integrity are those pillars, which Branden has explained in detail.

In a thread on the LAobjectivist Yahoo Groups list about this episode's oversights and errors, Judd Weiss wrote: "Penn has apologized for getting the episode wrong. I wrote to him right after I saw the show, and told him I couldn't believe he lumped Nathaniel in with those crackpots, when Nathaniel should have been portrayed as the antidote from reality. Penn wrote back to me that he was sorry for that, that he honestly didn't know what angle to take with Nathaniel, and that he ultimately got it wrong."

Of course, admitting a mistake lends itself to correcting it, especially one involving so important a need as self-esteem in human functioning (there was further comment on the thread that Bullshit! should make the correction on their DVD). Penn likely realizes this too, and given that he cares about rationality and freedom, these are also two essentials that Branden has espoused his entire adult life. Since it is supposedly their job at Bullshit! to attempt to expose and refute bs, I'd prefer that they redo this episode or at least offer a recantation in the DVD, along with doing an informative interview with Branden (unfortunately, since doing interviews at this point in his life appear difficult, they could instead show past clips of his take on the meaning and value of self-esteem).

Allow me to end with a poignant quotation from Branden's Honoring The Self, published in 1985:

It is to anyone who loves his or her life and has not known that there is no higher virtue that this book is addressed.

To anyone struggling for personal happiness while being told that personal happiness is the concern of the spiritually inferior; to anyone who understands that ego and self are a height to be climbed, not an abyss to be escaped; to anyone who does not see freedom as a burden or choice and responsibility as a tragedy; to anyone who appreciates the courage and integrity that honest selfishness requires; to anyone who grasps that without self-assertion, no dignity is possible; to anyone fighting for self-esteem against an onslaught that begins in the nursery and extends to the Himalayas; to anyone able to see that this earth is the distant star we must find a way to reach—it is for you that this book is written.

Either file format (i.e., rtf or pdf) that’s zipped and linked below has the same content, though you can work within the .rtf digitally, whereas the .pdf you can transcribe the stems with pen and paper. :)